Greyhound racing has seen some loss in popularity in recent years, but continues to be a beloved pastime for many. A question that arises often is what happens to the animals once their racing life has come to an end. Fortunately, greyhounds are almost always able to retire in a loving home that sees them live out the rest of their life in the care of a new owner. These are some of the ways that greyhounds enter retirement.

Some greyhound racing owners will allow their dogs to be adopted by a private party. While it’s not quite as common as other types of adoption, it ensures that the animal is going to a good home, at the trainer’s discretion. It also has the benefit of allowing the racing owner and new owner to bond before entering retirement, and will also give the previous owner the chance to keep track of how their animal is doing in retirement.

This is by far the most common type of adoption for most greyhounds, and sees thousands of dogs retire successfully through a greyhound adoption group. Racing owners are made fully aware of how long greyhounds can live for, which can be up to and over a decade even once their racing days have come to an end. Therefore, when the dog has reached a certain age, or the racing owner feels that it’s time for the dog to retire, they will reach out to an adoption group and allow the dog to be moved to a new, temporary home with other retired greyhounds. Many racing owners do want their animals to find good homes once their professional life is over, and an adoption group is arguably the best way to go about it.

This method also allows the greyhounds to be successfully adopted down the line, increasing their chances of finding a good home while cutting down on the amount of commercial breeding, especially for highly valued breeds. 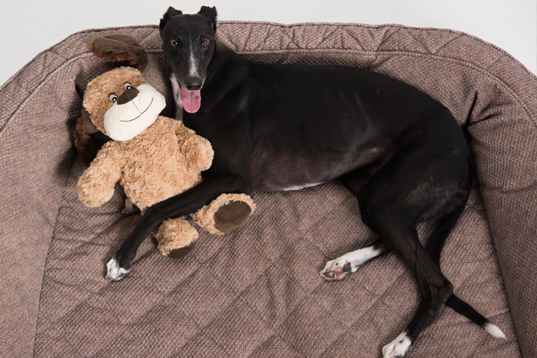 Another popular option is for people to “pre-adopt” a greyhound even before they’ve stopped racing. This means that the animal has a guaranteed place to live once they’re ready to entire retirement, allowing the greyhound to completely skip the necessity of entering an adoption home, where they can sometimes be stuck for even years as they wait to be adopted. It’s among the most successful retirement programs currently underway, and has seen dozens of retired racers finding new, loving owners.

While rarer than the other types of retirement, this is still once that occurs fairly often. The owner of the dog will often take a great liking to the animal, especially after having interacted on a frequent basis. Once the animal’s racing days have come to an end, the owner will simply adopt the animal and take it home. This most often occurs with owners that fall in love with a particular dog over time.