As soon as mankind invented the wheel, there has been a driving force to see just how fast that wheel could turn. To put it another way; breaking the land speed record has been an obsession for pretty much as long as civilization has existed. Some of the record breakings came easy, and some took years of dedication and effort.

Here is a brief look at how the land speed record has been beaten over the years, and where it stands today.

When taking land speed records into consideration, many don’t go as far back as 1898. But that is when the first record was set, by a man named Gaston Chasseloup-Laubat. The vehicle was created by a French manufacturer called Jeantaud, which operated between 1893 and 1906. The specific details of the car that set the record aren’t widely known, but what is known is that it was the first to ever hit a maximum speed of 39.24mph (63.15kph.)

After the first record was established, it took some time for new contenders to enter the fray. These contenders came in the form of Eugène Brillié and Gustave Gobron, who founded French company Societe des Moteurs Gobron-Brillié. The car they created was the Gobron-Brillié, and it was an evolution in many regards. But, most importantly, it smashed a psychological barrier that had plagued engineers for years; a speed beyond 100mph. A new record is set of 103.56mph in 1904.

Over To The USA

We are still nowhere near the time of online roulette sites for Aussies being a twinkle in the smartest engineer’s eye in 1906, but engineers are committed to tackle the land speed record in earnest. In the USA in 1906 a new record is set by Fred Marriott. He manages to achieve 127.659mph (205.5kph) in a Stanley Rocket.

It was the iconic Bluebird that took things to the next level, shattering records with a top speed of 301,3mph (484,9kph,) and using far more accurate recording equipment. Sir Malcolm Campbell was the man to set the long standing record in 1935. 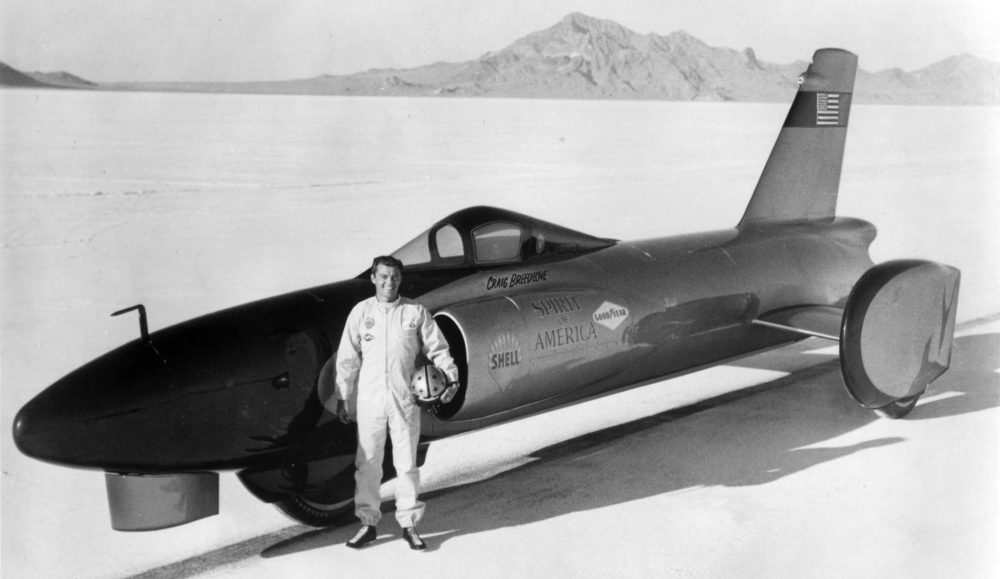 After a second record breaker by an evolution of the Bluebird, the Spirit of America stole away the title in 1964. The man behind the wheel was Craig Breedlove, and the 15,000 horsepower engine went far beyond what was previously imagined; 608.2mph (1014kph.)

There was nowhere else to go but jet engines, and thus we have the Thrust 2. Using a Rolls-Royce jet engine, this monster machine, piloted by Richard Noble, went one step beyond; 650.88mph (1.019,4kph.)

An iteration known as the Thrust SSC beat the record in 1997, and was the first and only land vehicle to break the sound barrier. Though, this vehicle is more jet plane than motor vehicle, made from two Rolls-Royce Spey 202 afterburning engines, normally used for jet fighters. The man behind the wheel was Andy Green. This is the record that stands today.