When we think of popular kinds of racing, we tend to imagine something like Formula 1 or NASCAR, but there are plenty of different kinds to choose from, and some of them involve our friends from the animal kingdom. Horse and greyhound racing are extremely popular already, but they’re not the only kinds of animal races that take place. This is a selection of animal races that are almost too bizarre to be true, but take place nonetheless.

The Arabian Peninsula is arguably most well known for producing the famous Arabian horses, some of the fastest horses ever, and the ancient ancestors to the Thoroughbred. But the Peninsula is also home to racing of a completely different kind; one that involves the famous mammal that has taken countless people through harsh deserts. Camel racing is extremely old, dating back to the 7th century, but it wouldn’t be until the more modern 1970s that it became an organised sport, and there are even communities and governing bodies dedicated to ensuring that all races go well. It’s quickly growing in popularity around the world, and is now being recognised as a proper international sport that’s expected to continue to grow its audience base in new countries over the next few years. While camels are not as fast as horses, they are capable of achieving speeds as high as 40 km/h.

Along with greyhound and horse racing, Australians also now enjoy sheep racing more and more with every passing year. As one of the biggest sheep farming countries in the world, it makes sense that sheep would eventually become a source of entertainment, and the yearly Booligal Sheep Races have now become a staple in New South Wales. The event is one of the most successful of its kind, and much of its proceedings go toward charities around the country and it makes a great excuse to go out for the day when you need a break from your favourite online casino in Malaysia. The Sheep Grand National is another annual activity that sees sheep fight it out for the winning position on Hoo Farm, which can be found in the UK. The animals in question will have to wear special coats while attempting to navigate hurdles. 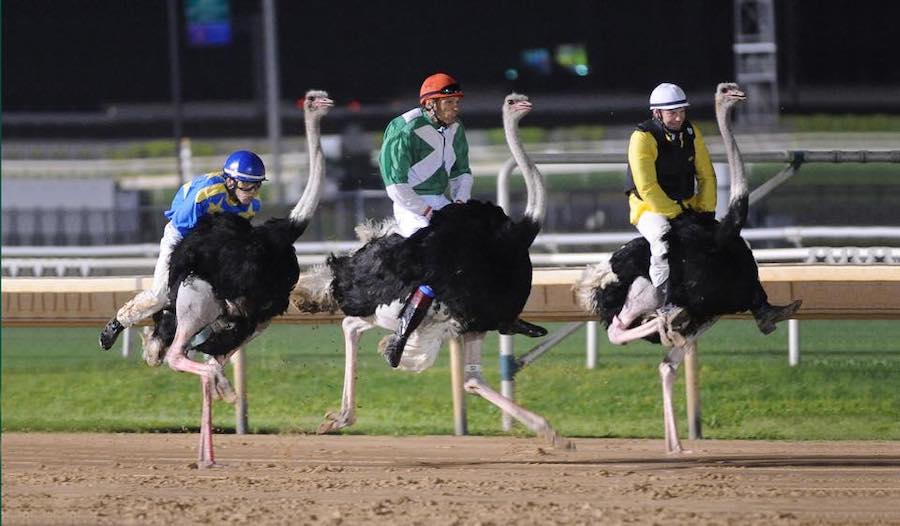 Ostriches are large, Emu-like birds that roam the wilds of Africa. They are the world’s largest bird, with many standing almost 3 metres in high, making them far to large to be able to fly. They also hold the title for being the fastest running birds on land, are able to run at top speeds of 70 km/h. Many of the more popular races take place in the United States, where people are able to ride them similarly to horses, making use of saddles to stay balanced. Perhaps the most well known is the Ostrich Festival that takes place once a year in Chandler, found in the state of Arizona. Similar events can be found in neighbouring states, such as Nevada and Kentucky.